Superfood Spotlight
Mesquite ✨
Also known as Ironwood, most people will know Mesquite from the reference to mesquite wood-smoked or barbequed foods. However the nourishing food known as Mesquite flour or powder is from the ground seed pod, not the bark, which is produced by the Mesquite tree.
Traditionally consumed and relied upon as a staple food, it was revered by Indigenous peoples wherever it grew.
Mesquite is rich in fibre and protein, as well as minerals such as calcium, magnesium, potassium, zinc and iron, and the amino acid lysine.
Despite its sweetness, Mesquite is low-glycemic and has shown to be useful in helping balance blood sugars. This is due in part to its fibres, such as galactomannan gum.
Enjoy the slightly sweet, nutty, malty, caramel-like flavour of mesquite in not only smoothies and Elixirs, and especially chocolate-based ones, but you can use in baking and add to muffins, pancakes and breads.
Mesquite is one of our favourites at home, and we are sure it will become one of yours too.
Do you currently use mesquite?
Are you inspired to try it out?
Let us know below and what you’ll be adding it to…
#mesquite 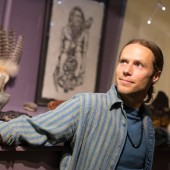 Get the Most Out of Your Herbs